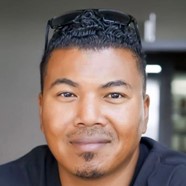 The ICIS 2021 Conference Committee is excited to welcome Dantley Davis as the keynote speaker in Austin.

Davis was born in Seoul, Korea to an American Air Force member and a Korean woman.  His father traveled overseas frequently and Davis was known to pull apart the radios and other electronic gifts to determine how they worked.  He received his first computer at eight years old and taught himself how to program in Basic and played PC video games frequently.  As computer games became his primary hobby as a teen, he often cracked the copy protection of the games and learned Photoshop to modify and enhance their 3D models.  By high school, Davis discovered graphic design and began to market his design skills by developing websites for small businesses.  He was recruited by a design firm in San Francisco to work full-time while he pursued his undergraduate degree.  Early in his career, Davis found that he was frequently the youngest person on the team and the only person of color.  He has always been particularly interested in the needs of the consumer, and how his work could benefit both the company as well as the customer.  At Twitter, Davis says he is “part of a team whose core responsibility is to help shepherd and take care of the public conversation on the internet.”

In this recent interview with Protocol, Davis describes his efforts to build the most diverse team in tech, and why he believes the notion that there’s a pipeline problem is a myth.   Davis is vocal about diversity and inclusion issues in the workplace and recently launched a UX mentorship program exclusively for women for Twitter Design & Research.  Looking to the future, he believes social media services like Twitter “will be more open, accessible, and customizable with the option to craft bespoke experiences that reflect the needs of people and culture.”

Dantley Davis is married with two small children, and lives at the southern tip of Silicon Valley in the Bay Area.